Don’t woof me! Cats Rule! Thanks Funny or Die for this great pix.

2. It’s taken to meowing in a blood curdling fashion.

4. Instead of curling up in the window it bashes it’s head against the window all night long.

5. The only chew toy it enjoys is a severed finger.

Lil Bub never got called an asshole. Not like you.

This song is basically perfect: Catty B

“Return of the Cat”

5. There’s a dig in here about Taylor Swift’s dating foibles but I just don’t care to finesse it out.

Every cat has a talent, some are writers(ahem), others are singers. Monster is a singing cat. A vocal disorder makes it sound like Monster is singing every time he yawns. How do you get to Carnegie Hall? Yawn, yawn, yawn.

Big cats get the lion’s share of our attention. We admire their power, felicity of movement, and striking coats of spots and stripes. But the majority of cat species alive today are small – there are more than thirty species of little cats that prowl landscapes from the Sahara Desert to Siberian forests. And while they might look like the moggies that purr and cuddle on our laps at home, these cats are wildly different, adapted to mimic the calls of their prey, spring astounding distances into the air, and blend into the jungle so thoroughly that even scientists have trouble finding them. Here’s a look at some of the world’s cats that are smaller, but in no way lesser big small cats. To see the rest of the small and powerful click here.

Kennels and catteries are so last year – instead, it’s palaces with spa facilities, and high-end hotels with outdoor balconies where owners are keeping their pampered pets.Luxury accommodation for cats and dogs is the latest trend for holidaymakers who don’t want to feel as though their fluffy friends are missing out while they are away.

The Ings Luxury Cat Hotel, in Yorkshire, has been overwhelmed with enquiries and is now booked up until 2015.

From The Daily Mail

Every cat owner thinks his/her cat is a hero, well the cat below really is! Watch this Supercat save a young boy from a dog attack. Go Tara Go!

This cat is thinking “You morons got a defective cat. Now you’re stuck with it.”

1. Your cat is constantly plotting for and against you.

2. Your cat knows that he’s the rightful heir to the Iron Throne or any throne.

3. Your cat expects to be waited on paw and paw.

4. Your cat doesn’t want to hear your excuses.

5. Your happiness is none of your cat’s concern.

We apologize in advance for the silliness of these jokes. Feel free to laugh and pity us at the same time.

Q: What do you call a pile of kittens

Q: Did you hear about the cat who swallowed a ball of yarn?

A: She had a litter of mittens. Q: What do you get if you cross a chick with an alley cat?

A: A peeping tom.

A guy walks into a laundry run by cats. “Excuse me”, he said to the cat in charge, “Can you get milk stains out?” “Sure,” replied the cat. “We’ll have that stain licked in a minute!”

Check out these famous friends of felines throughout history.

1. You will never be the father of any of your cat’s kittens.

2. Your cat doesn’t care about the size of your package.

3. You already know your cat won’t call you in the morning or at anytime.

4. You know where your cat has been.

5. Your cat won’t ever accidentally sleep with your sister.

1. Your cat won’t tell you you’re doing it wrong.

2. Your cat doesn’t expect a call the next day.

3. Your cat won’t give you a suspicious burning down there.

4. Your cat doesn’t care what you look like naked.

5. You can pet more than one cat at a time without guilt.

Think you’ve got the cutest cat in town? Check this cute kitty below. 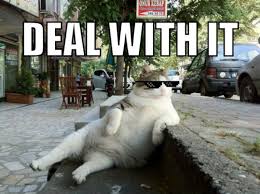 1. Your cat won’t ever send you a friend request

2. Your cat won’t post pictures of its latest meal in an attempt at culinary Schadenfreude

4. You’ll know immediately when your cat changes its privacy regulations

5. Your cat won’t ever tag you in pictures that could embarrass, shame or cause a legal action against you.

Talk about your interspecies communication, check out the video below. If you have any examples of interspecies love we’d love to see it.

Cat Owners Beware! Raccoons are waging a sneaky war to infiltrate, impersonate and insinuate themselves into the lives of cat lovers everywhere. That mask on raccoons faces a coincedence? I think not! Check out this chilling tale of deception below.

Ginny Ballou was half asleep when she reached over to pat her cat, Pretty Boy. Only the long-haired tomcat was nowhere in sight. What Ballou was running her fingers through instead was the coarse fur of a deranged raccoon.

The vicious animal had crept into the house through the cat door on Wednesday morning, sneaking in beside the 73-year-old woman in bed before jumping on Ballou’s face and locking on, said police in Hingam, Mass.

“She had been sleeping on her bed and she thought it was a cat and she went to pat it and found out it was a raccoon,” Sgt. Steven Dearth of the Hingam Police Department told ABC News. “It began to attack her and bit onto her mouth.”

Ballou, her lower lip locked in the jaws of the creature, struggled for a terrifying two minutes before managing to pry the raccoon off with her thumbs and throw it to the floor.

Ballou could not be reached for comment, but her daughter recounted the details of the unnerving ordeal to ABC News affiliate WCVB.

“She used her landline telephone to smash it on the head. It ran out of the bedroom; she closed her door and called 911,” Jen Bowles said.

When Animal Control and environmental police arrived they found the beast, not much bigger than a cat, hiding behind the toilet where they were able to rope and snare it, police said.

Hingham Animal Control Officer Leslie Badger helped subdue the raccoon and take it to a veterinarian where it was euthanized and tested positive for rabies.

“This is a first, to have a situation like this happen,” Badger told WCVB.

Dearth also said this is the first time he’s ever experienced this type of situation in all his time as a police officer.

“This is a unique occurrence and something you would not expect, especially with a small pet door,” said Dearth. “She’s had this cat door for 20 years and never had any issues with anything coming in.”

Ballou received the first of a number of required rabies shots on Wednesday and was released from hospital later that night. She is at home recuperating from her injuries which include puncture wounds on her thumbs and fingers, stitches to a gash on her lip and scratches on her face and neck.

1. Your cat won’t make you stay late and then screw you on overtime

3. Your cat can’t email you documents after work hours

4. Your cat won’t take your ideas, use them as their own and never ever give you credit

5. Your cat won’t get drunk at the Christmas party and try to kiss you 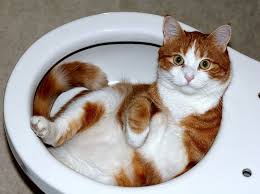 1. Your cat won’t ever “forget” to take/put on birth control.

2. Your cat won’t TiVo over Game of Thrones/Scandal and pretend it was an accident.

3. If your cat has a problem with you you’ll know immediately. Your cat can’t spell passive aggressive.

4. Your cat doesn’t want to change you. It only wants you to change the kitty litter.

5. Your cat doesn’t compare you to other humans. As far as your cat is concerned all humans are hopeless.